Looking considerably less cool than he did in Aruba or when he was caught on videotape bragging about disposing of Natalee Holloway's body, Joran van der Sloot was paraded before an auditorium full of reporters, according to this article in the San Francisco Chronicle.

"Moist-eyed and looking stunned... and wearing a green bulletproof vest, his hands cuffed behind him, the 22-year-old Dutchman stared straight ahead and didn't respond to reporters' questions," according to the Chronicle article.Outside the police headquarters, seven Indian shamans in brightly colored ponchos repeatedly stabbed a cloth doll representing van der Sloot in a "spiritual punishment" ritual. "We're punishing him so that all the forces of evil are purged," one shouted.

I hope the Holloway and the Flores families find some bit of comfort in van der Sloot's having been brought to justice, and I cannot help but wonder how many other young women who we don't know about suffered and died at his hands while the money and political influence slowed the process. 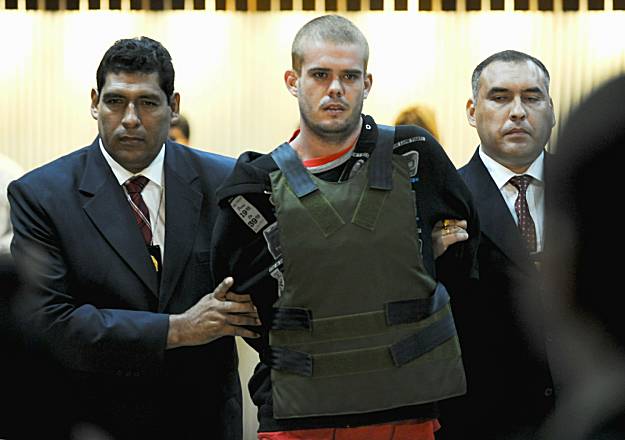