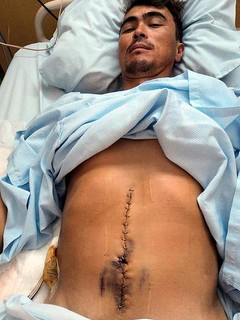 O'Donnell, who holds dual Irish-Australian citizenship, was shot in the back at point-blank range in front of several witnesses in broad daylight following an altercation with the shooter's wife over where he parked his bicycle. According to a local account:

At just past noon on Friday, August 19, Sam Wesley -- a West End business owner with roots on Roatán Island dating back to the 1840s -- came out of his house, pulled out a silver revolver, pressed it into Joe O’Donnell’s back, pulled the trigger and then walked back to his house without saying a word. There were at least five witnesses to the incident. As Mr. O'Donnell collapsed in the street, concerned shop owners Shannon and Christian ran to his aid, Mr. Wesley’s wife, Rosita, wagged a finger at them indicating her desire for them to leave the 40-year-old Australian dive instructor to bleed to death in the street. As a large crowd gathered, it seemed that Mrs. Wesley might get her wish. People took photos, screamed and gawked... but no one took action.

Fortunately, Paul Cleveland -- an 18-year Roatán resident was on the scene, and his military training kicked in. He stuffed one of his fingers in the bullet hole, sent someone to retrieve a bag of ice, and secured a truck to transport Mr. O'Donnell to the local hospital. Mr. Cleveland, who describes himself as a long-time good friend of Mr. Wesley, was also the first to make a statement against him. He said the crime had “no motive” other than Mr. Wesley was acting “completely on his wife’s inclination".

This case may seem bizarre, but on Roatan dramas like this are coming to seem increasingly common. Prayers and positive energy to Joe O'Donnell and his family.