Costa Rica is widely regarded as one of the safest travel destinations in Central America. It certainly doesn’t have the murder rate of, say, Honduras. There is at least one peril, however, for which the country is hard to rival: drownings.

Several recent drownings in separate incidents off Jaco, CR, underscore the treacherous riptides and the lack of life guards characterizing most of the country’s beaches. 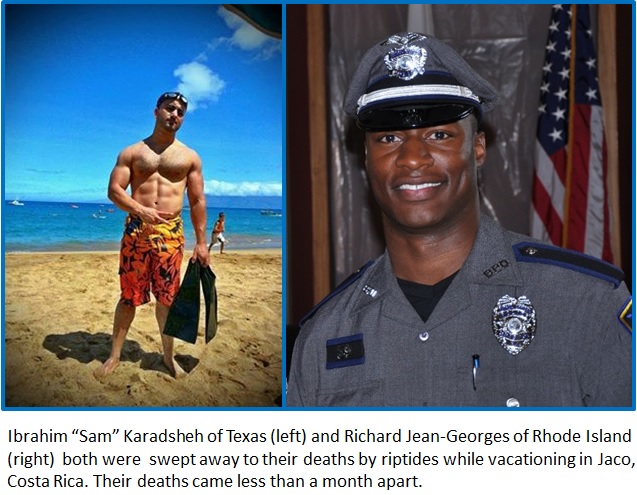 On May 15, 2015, Inside Costa Rica reported the confirmation that a body found drifting 3 miles from shore, was that of Ibrahim “Sam” Karadsheh.  Mr. Karadsheh, a 33-year-old U.S. citizen, was pulled out to sea three days earlier by a powerful riptide while swimming with two cousins at Jaco, a resort town on Costa Rica’s Pacific coast that is popular among surfers.

Mr. Karadsheh’s cousins – who asked not to have their names used in this article – said they went into the surf shortly after registering at the Hotel Cocal & Casino.  “No one in the hotel ever said anything about riptides. There were no warnings signs. Nothing.”

The cousins also struggled with the undercurrent, only making it to the beach with the assistance of “the kid who was renting surfboards. The lifeguard didn’t show up for about 10 minutes” after Mr. Karadsheh was pulled out to sea.

Mr. Karadsheh’s death came less than 10 days after two locals drowned off the beach at Jaco. Then, less than a month after Mr. Karadsheh’s death, another U.S. citizen – Rhode Island police officer Richard Jean-Georges – perished under nearly identical circumstances while vacationing in Jaco.

One of the Few Towns With Lifeguards

Costa Rica’s Public Security Ministry reports that 50-60 “tourist drownings” occur every year throughout the country. These numbers include tourists from inside Costa Rica and from outside the country. With over 800 miles of coastline, some of the most treacherous riptides in the world, and an economy based largely on water-based recreation, many are shocked to learn how few and far between  lifeguards  are in Costa Rica.

“As terrible as this sounds,” said Timothy Williams, editor and publisher of Inside Costa Rica, “if you were to get pulled to sea by a riptide, Jaco would probably be the best place in the country for it to happen to you with the highest chance of being rescued alive. There are Coast Guard vessels nearby, lifeguards, et cetera.”

Mr. Williams adds, “Jaco is one of the few places in this country that there are lifeguards. Most beaches don’t even have that.”

The few Costa Rica beaches that have lifeguards mostly rely on volunteers, and Coast Guard resources are strained by the need to engage in drug interdiction activity. Mr. Williams described the Coast Guard’s search and rescue resources as “pretty sophisticated” and the searchers themselves as “pretty damned diligent”; nevertheless, he acknowledged the limits of their capabilities.

“In cases like this, after three hours, quite honestly…they don’t believe it is worth the cost of keeping aircraft in the air looking for someone who most certainly has drowned,” Mr. Williams said. “After all, they have fastboats and narco-submarines filled with cocaine to search for every day.”

“Everyone Seemed to Know”

According to Mr. Karadsheh’s cousins, Jaco residents seem to have accepted drownings as a normal aspect of daily life.

“Everyone seemed to know that, after someone is pulled out their body surfaces three days later,” one of Mr. Karadsheh’s cousin said. Nevertheless, it was only after their cousin’s disappearance that “a guy who worked in the hotel told us, `This kind of thing happens all the time.’”

While the search for Mr. Karadsheh was ongoing, the cousins were told by the owner of a nearby marina that a 15-year-old boy had drowned in the area a few days earlier.

At Least 3 Drownings in 2 Weeks

Mr. Karadsheh’s drowning was the third in less than 10 days in Jaco. On May 4, Inside Costa Rica reported that two locals had drowned in separate incidents over the weekend.  The body of a 17-year-old with the last name Ferna-Chavarria was discovered on the beach about two hours after he was swept to sea by a strong undercurrent. The following day, a 25-year-old identified by the last name Rodriguez-Mora disappeared after reportedly ignoring lifeguards’ warnings about riptides.

It’s not clear whether the marina owner who mentioned a “15-year-old” who had drowned recently was talking about yet another drowning or one of these.

“There is just not much warning for tourists and little to no prevention of these incidents,” Inside Costa Rica’s Mr. Williams said. “Resorts and hotels don’t like to warn about the risks because it isn’t exactly `good advertising’.”

Between Mr. Karadsheh’s and Mr. Jean-Georges’ deaths, Mr. Williams said, at least eight Costa Ricans have drowned in riptides around the country.

Why Are So Many Canadians Drowning in Costa Rica?

Father Drowns Trying to Save Son in Costa Rica