Are All Missing Persons Created Equal?

16-year-old Amy Vargas, who disappeared in Cancun Jan. 30, has been found safe and returned to her family, according to the FBI. Apparently the teenager left the hotel where she was staying after an argument with her grandmother. 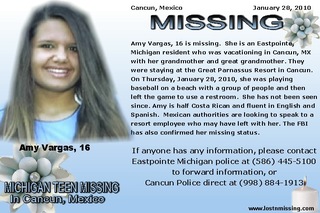 I'm thrilled by the happy ending - but it does point up a disparity in the ability or willingness of authorities to respond to different kinds of cases. The FBI got involved in this case immediately (as they should), presumably because the case involved a minor. As the experience of our families show, it is much more difficult to get a reaction (still less a search or investigation) when the missing person is an adult and particularly an adult male. It's difficult to come to any other conclusion than that certain cases warrant different treatment, simply because of who the victims are. In the 10 months since "our disappearances" began with Ron Scheepstra in Xcalak and my brother Joe in Roatan, we've seen only two happy endings -- both involving young women.

The first occurred back

in July, when Harvard student Jocelyn Karlan and two college friends disappeared while hiking in Ecuador.

Jocelyn's Mom, Beth Karlan, a Harvard-educated surgeon and professor of obstetrics and gynecology, "emphasized that the U.S. Embassy and the Ecuadorian government put together a highly coordinated effort to find the students, sending out search teams by foot as well." She described the U.S. State Department as "remarkable, and they really encouraged [the Ecuadoran police helicopters, which were repeatedly grounded due to bad weather] to do one more run before dark."

To what extent did the gender and age of the missing persons, combined with the social and professional status of their parents, affect the willingness and ability of U.S. government resources to be deployed and the enthusiasm of local law enforcement to become engaged? We'll never know for sure, but I do know that even within our sorry little community of families of missing adult males there is a wide disparity in the responses and deployment of resources. As frustrating as my family's experience has been, there is no doubt that we received greater help and cooperation from the U.S. government than the Gimelfarbs, the Scheepstras, and the Aliceas and the Pritchards combined.

Why? My guess is that the Dunsavages have a geographically dispersed network of friends and family who are not shy about picking up the phone and contacting legislators and others. This network, while certainly NOT Ivy League, nevertheless consists of people who are educationally and economically north of the national average. In a system in which "standard operating procedure" seems to be "wait to see how many congresspeople call," we rank a bit above the Aliceas, but nowhere near the Karlans.

This is sad. I am thrilled to see the stops pulled out on behalf of these young women to bring them home safely to their families -- however, it seems inherently unfair that the same resources cannot be deployed effectively and efficiently when the missing persons are males of a certain age and tax bracket.

The U.S. Government Will Help If You Are a Congressman

The Embassy Doesn't Care If Your Loved One Is Found